Taxpayer, after his father died, became the sole beneficiary of his father’s IRA. The Taxpayer opted for lump sum payment with no taxes withheld, and according his father’s wishes shared the distribution equally with his two siblings. Based upon advice by a paralegal at the law firm assisting with the administration of the estate, the taxpayer did not report the IRA proceeds as his gross income. The IRS issued a notice of deficiency, which the taxpayer protested, insisting it would be inequitable to hold him liable for the income taxes, because he voluntarily shared the proceeds with this siblings, from whom he was unlikely to recover any of the taxes; further he alleges that he was disadvantaged because of erroneous advice from the law firm. The Court held in Morris v. Commissioner, TC Memo 2015-82 that despite the taxpayer’s honorable actions and good conduct, they had no bearing on whether the IRA distributions were included in his gross income. Further, erroneous advice is irrelevant in establishing the taxable status of the distributions.

Outsource your accountings to TEdec and we'll do the data entry for you! [ Read More ] 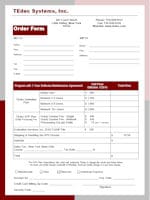 We still do sales the old fashion way, person to person! [ Read More ]